After Jesus had finished all his sayings in the hearing of the people, he entered Capernaum. A centurion there had a slave whom he valued highly, and who was ill and close to death. When he heard about Jesus, he sent some Jewish elders to him, asking him to come and heal his slave. When they came to Jesus, they appealed to him earnestly, saying, ‘He is worthy of having you do this for him, for he loves our people, and it is he who built our synagogue for us.’ And Jesus went with them, but when he was not far from the house, the centurion sent friends to say to him, ‘Lord, do not trouble yourself, for I am not worthy to have you come under my roof; therefore I did not presume to come to you. But only speak the word, and let my servant be healed. For I also am a man set under authority, with soldiers under me; and I say to one, “Go”, and he goes, and to another, “Come”, and he comes, and to my slave, “Do this”, and the slave does it.’ When Jesus heard this he was amazed at him, and turning to the crowd that followed him, he said, ‘I tell you, not even in Israel have I found such faith.’ When those who had been sent returned to the house, they found the slave in good health.  (Luke 7:1-10)

This time through the gospel text for the second Sunday after Pentecost I am noticing a word that I hadn’t singled out before.  It is the word “worthy.”  It is interesting that the centurion had Jewish elders who were apparently friends despite the fact that he was a Gentile.  I wonder how those elders got around the Law’s prohibitions about associating with this man.   They certainly went to bat for him by urging Jesus to heal his daughter.  They thought the centurion deserved Jesus’ help because he was worthy.

The centurion himself was humble enough, even second-guessing his request when Jesus complied.  I get the sense that he was horrified to realize he had virtually asked Jesus to break religious law in the process of healing his daughter: “I am not worthy to have you come under my roof.”

I suspect that I noticed the worthy bit in the text because my retirement from full time ministry begins this coming week.  There is much to recommend about being a pastor, but there are many pitfalls too.  One of the annoying aspects of being a pastor is having people think that you are something special, you have a hotline to God, or they have to clean up their language around you.  You are more “worthy” than everybody else.  What is even more troubling is if you as a pastor find yourself slipping into the same assumptions about yourself.  In that case you might want to start considering another way to spend your time.

Misguided arrogance doesn’t last long, because we pastors are put in our place routinely, if not by our own missteps, by the “helpful” observations of those who would never dream of putting us on a pedestal in the first place.  Maybe it is that sort of pinballing between people’s expectations (and our own) that keeps us humble, and exhausted.

There are plenty of moments in ministry that remind us what a privilege it is to serve God’s church as a Minister of Word and Sacrament:  An anxious but holy vigil with a family in a hospital room.  Breathless stories and sticky hugs from little children.  Seeing hope in a teenager pulled back from the brink of self-destruction.  Placing the bread of the sacrament in a hand lined with grease stains.  Worthy?  Of course we are not worthy of this.  Grateful?  Yes.

I have worn my alb hundreds of times, and will wear it for the last time today, as far as I know.  It was purchased for me fifteen years ago by the church where I served as an interim associate during the year before my ordination.  At times I have had mixed feelings about wearing it, but now I will hang it up with nostalgia for the joy I experienced in leading worship.  Chances are, I will no longer need the formal uniform of clergy.

One of the reasons I am hanging up the alb and making more room in my life is that my young grandchildren live nearby, and I want to spend more unhurried time with them.  They call my husband and me “Opa” and “Oma,” the old German/Dutch names for grandpa and grandma.  We love hearing them from our grandchildren’s lips.

I don my most casual, kid-friendly clothes before I pick them up at the YMCA.  Getting on their level and rediscovering the worms in the backyard, rocking our little one before his nap, and singing silly songs together creates the kind of exhaustion I prefer at this point in my life.  I throw my food-smeared and grass-stained clothes in the laundry with a sigh of satisfaction.

As far as I can recall, the last time my granddaughter Rydia saw me in the role of pastor—attired in a suit for the occasion—was at her brother’s baptism a year ago last January.  I’m sure she had some questions about why Oma was doing it instead of her own pastor, and she was told that I am a pastor too. 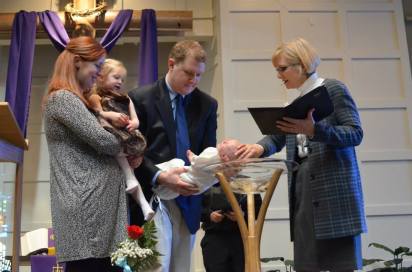 Link put up quite a fuss when it came time for the rite, so the carefully considered remarks I had prepared went out the window.  I asked the congregation to sing “Jesus Loves Me” instead.  Rydia was thrilled to hear everyone singing a song she knew.

A few days ago I took the children to the park, where 16-month-old Link tried to keep up with his 3½-year-old sister.  As we drove home, we passed Hope Church, the Reformed Church attended by my husband as well as our son’s family.  Rydia proudly pointed it out. “That’s my church!”

“I know,” I replied.  “Soon it will be my church too, because I won’t be the pastor of that other church anymore.”

“You will have to wear your pastor clothes when you come to my church,” she reasoned.

“Oh, no.  I don’t need to wear them, because I won’t be your pastor.  You already have one.  Pastor Russell is your pastor, right?”

That sounds about right.

2 thoughts on “Changing Out of My Pastor Clothes”